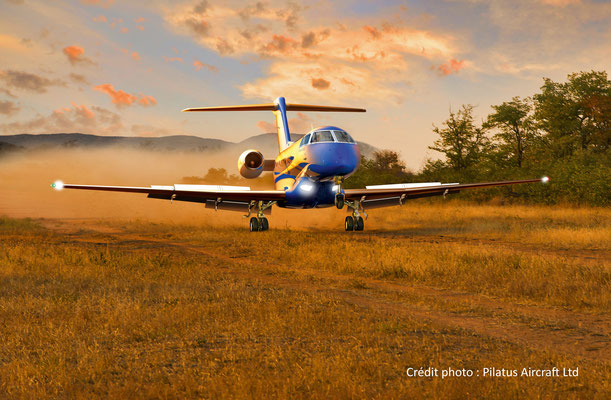 Pilatus embarks on the market of light business jets with the PILATUS PC-24.

The Swiss manufacturer Pilatus unveiled yesterday at the Geneva Motor Show (Ebace 2014) the list of companies launching the aircraft.

Installed on five continents, the seven companies have ordered 85 aircraft.

Pilatus anticipates the first presentation of PC-24 on August 1, 2014. The first deliveries are scheduled for early 2017.

The launch of this new generation jet is a real event for Pilatus and its customers accustomed to fly on single turbine airplanes.

Since its commissioning in 1991, the PILATUS group has sold more than 1200 single-turbine PC-12 aircraft. By developing its first jet jet, PILATUS is launching a commercial challenge, the PC-24 having to compete with several small jets, including the Embraer Phenom 300.

The PC-24 will be one of the most affordable medium-haul jets on the market with a range of 3335 km, becoming the only off-road aircraft in the 6 or 8-passenger version capable of landing in over 21,000 airports in the world, but also on tracks in sand, grass or snow thanks to its big low pressure tires …

The catalog price of this device is set at $ 8.9 million.