Home » What is a Private Jet Terminal, or FBO ?

What is a Private Jet Terminal, or FBO ?

What is an FBO?

The acronym FBO stands for “Fixed Base Operator”, or base of aeronautical operations.
In business aviation, FBOs are terminals for private jets and their passengers.

FBOs have a handling mission that is divided into two branches:
– The first one consists in welcoming passengers before or after their flight in a dedicated VIP terminal, separate from the terminals for airliners ;
– The second is to provide airport assistance to private jet airlines. Such as the reception of flight crews, or the refuelling, de-icing, maintenance and hangar parking of aircraft.

There are currently more than 17,000 FBOs for private jets worldwide, including 4,000 in the United States.

How are you welcomed in an FBO?

Being a passenger of AEROAFFAIRES is benefiting at every moment from a special attention and a tailor-made service.

After your reservation, we will give you the address of the FBO you will have to go to before boarding your flight. AEROAFFAIRES offers to organize your transfers.
If you have a preference, and when possible, you can choose which FBO you wish to use.

As soon as you arrive at the FBO, you will be greeted in front of the entrance by the reception staff. Your luggage is taken care of and loaded into the private jet. You can meet the captain of your aircraft who can give you all the details of your flight.

A moment of relaxation in a reserved area

In the private terminal, you have the possibility to sit in a comfortable space. Very often, you have a breathtaking view of the airport facilities and private jets.

You have the opportunity to treat yourself to a simple gourmet break and refresh yourself.
The majority of FBOs give you the opportunity to read the press, have access to meeting rooms, a WiFi connection and get ready in a bathroom.

Some larger FBOs can offer concierge services, and take care of your children and pets during the waiting time.

A very fast service that adapts to your schedule

In most cases, passengers do not wait and pass through the FBO very quickly. A private terminal has the advantage that no time is wasted. The time between arrival at the FBO and the take-off of the aircraft is 20 minutes on average.

All private jet terminals have the possibility to carry out the necessary security and immigration checks.

If your private jet is parked right in front of the FBO, you will exit and walk to the FBO. You may have a short drive to get to the plane. At some airports, your taxi can also take you to the door of the plane. 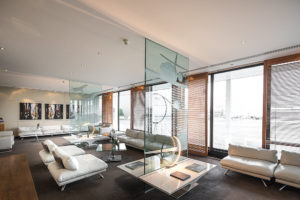 The history of FBO

In the 1920s, after the war, many American pilots bought military aircraft at an affordable price. They used them for entertaining air shows across the country, creating “flying circuses. This was one of the most popular forms of entertainment during the roaring twenties. Aviation was in its infancy and there were few airfields. Pilots flew around with mechanics and landed in the fields. They had no fixed base.

The passage of the Air Commerce Act in 1926 regulated civil aviation and set standards in terms of pilot licensing and maintenance for aircraft. Pilots and mechanics had to register as a company with a fixed address. They then establish themselves on aerodromes to operate their aircraft. This is how the term “Fixed-Based Operators” came into being.

FBOs will continue to develop all over the world at airfields and airports. Today, most business aviation FBOs do not operate their own aircraft but offer services to private jet airlines and their passengers.

FBO activity is correlated with economic conditions and the price of oil, which accounts for a large share of its revenues.

Like airlines, the FBO market is undergoing consolidation. The number of players has been declining over the past 15 years. The number of players has fallen by two-thirds since the 1980s in the United States. This consolidation is carried out by existing companies that want to expand their networks. These growth opportunities have made FBOs an investment of choice for investors. The majority of acquisitions in recent years have been possible thanks to private equity financing.

Signature Flight Support is currently the largest player in the market with more than 200 bases of operations worldwide. Medium-sized brands such as Sky Valet are succeeding in making a place for themselves by positioning themselves in niche markets or by developing an exceptional identity.

Paris – Le Bourget airport is the airport with the most FBOs in competition, there are 8 of them, but many airports around the world have only one private terminal to accommodate private jets and their passengers.

Live an experience in an FBO with AEROAFFAIRES

AEROAFFAIRES offers you to rent a private jet for your travels and to choose, when possible, the FBO you wish to use.
Our team of air experts can also advise you on private terminals according to your needs and expectations.