Accueil → Why isn’t turbulence so bad on a plane ?

Why isn’t turbulence so bad on a plane ?

“Please fasten your seat belts, we are going to go through turbulence”. Surely you have already heard this announcement from the captain during a flight? This announcement is usually followed by a few jolts or a feeling of falling into the void following an “air hole”… But do you know the origin of turbulence? If they can sometimes seem like the end of the world to some, there is no statistical data on a plane crash caused by turbulence. Here’s why we shouldn’t fear turbulence:

What is turbulence caused by ?

Atmospheric turbulence is defined as a disturbance in the path of an aircraft during flight that causes the aircraft to shake. These shocks are caused by a variation in the direction and intensity of the wind, which leads to vertical or horizontal accelerations that can change the trajectory of the aircraft. This turbulence can have several different origins:

The mountainous reliefs modify the surface of the earth but also the currents of air masses confronted with these reliefs. Thus, just as a river can be modified by “obstacles”, the land relief can generate turbulence. This is why some areas are more exposed to turbulence: this is the case for airports located near mountains. If you are flying through Europe, you will probably also experience turbulence when flying over the Alps.

L’ai says that there are several currents: rising warm air currents and falling cold air currents. This phenomenon of convection creates a rising air current and therefore variations in altitude. Thus, when the aircraft is confronted with a downdraft, it suddenly loses a few tens of meters of altitude, which can cause passengers to feel as if they are falling. This is what is commonly called “air gaps”.

Much more rarely, private planes and jets can themselves be the cause of turbulence! This turbulence occurs mainly during take-off and landing and is caused by the tips of the wings of the aircraft which create marginal vortices. These disturbances are called “wake turbulence”. 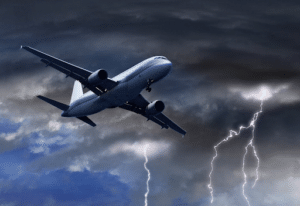 Although uncomfortable, turbulence is not dangerous. It is a normal, even natural phenomenon that does not threaten passenger safety. There are two major reasons why you should not fear turbulence in flight:

First of all, manufacturers design aircraft capable of withstanding all forms of external pressures and risks. The aircraft are therefore subjected to very robust resistance tests in very high or very low weight conditions. Moreover, an aircraft will never break down because of turbulence. Finally, in the event of disturbances, the various aircraft structures minimize the impact of turbulence during a flight, thanks to the wings that absorb the vibrations.

Pilots are very early aware of the meteorological study and the observation of atmospheric turbulences. When preparing a flight, pilots file a flight plan that can be modified in case of turbulence. In addition, they are assisted by on-board technologies that can detect turbulence zones in flight to avoid them. Finally, from the pilot’s point of view, turbulence is more of a customer service issue than a safety issue. Pilots are not worried about the aircraft being damaged, they are only concerned about keeping the best experience for their customers and the beverages in place.

So rest assured, if you enter a turbulent area, you are safe.

Our AEROAFFAIRES advisors remain at your disposal for more information. Available 24/7, our team will respond to all your requests. Get a quote online now or contact us at +33 (0)1 44 09 91 82.