Accueil → VOLOCOPTER INTENDS TO REVOLUTIONIZE THE AIR TRANSPORT OF TOMORROW

VOLOCOPTER INTENDS TO REVOLUTIONIZE THE AIR TRANSPORT OF TOMORROW

Known for its VoloDrone and the VoloCity, the German start-up Volocopter imagines a new device: the VoloConnect.

Created in 2007 under the name of e-velo, this company is specialized in flying devices such as drones or planes. Thus, it develops, tests and creates with the particularity to propose electric devices. In 2011, it imagines its first prototype, the VC1, an electrically powered plane that seduces many people and allows the start-up to break records, including the first manned flight in the world with an electric helicopter, in October 2011. This prototype is the basis for all the company’s other aircraft developments. In total, more than €322 million in financing has been raised since the company’s creation.

The company is also a pioneer in the field of aerial electric urban mobility. Faced with the challenges of strong global growth, Volocopter is one of the companies seeking to innovate in order to limit the congestion of tomorrow’s land routes. 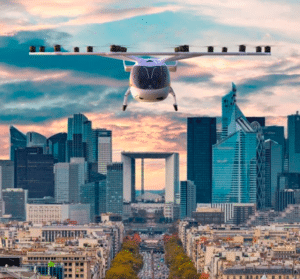 Volocopter, a company that innovates and intends to mark the transport of tomorrow.

Three major and innovative devices have been imagined by the German company: the Volodrone, the VoloCity and the VoloConnect.

The VoloDrone drone has impressive capabilities and offers many advantages. Its system allows great flexibility thanks to its size, but also to its range of radiation.

Indeed, the latter can support heavy loads and transport them in places with little or no access, all without a driver. This offers great freedom from the limitations of conventional ground-based devices. Thus, it is possible to travel up to forty kilometers with a maximum weight of 200 kilos. Finally, the greatest significance of this company is the fact that these devices are 100% electric and do not emit any emissions during the flight. Therefore, they are clean and silent.

After a first flight in October 2019, the VoloDrone is actively tested with their partner, DB Schenker. 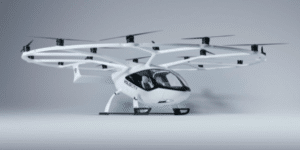 The VoloCity is intended to be the air cab of tomorrow. The fact of not needing to circulate only by ground appears thus as a solution, vis-a-vis the increasingly congested roads.

Like each aircraft proposed by the German company, these are silent and will be able to adapt perfectly to their environment without creating noise pollution. To do so, they are totally electric and without any emission.

The VoloCity should be proposed to connect the centers to the main stations and airports. By taking one of these flying cabs, travel time will be reduced thanks to a smoother traffic flow.

Two people will be able to take place on board this cab and be transported with the help of 18 engines. It is one of the most developed air cabs thanks to its numerous certifications and test flights. The company plans to make its first commercial flights during the Olympic Games in Paris in 2024.

For more information, read our article exclusively about the VoloCity from Volocopter.

VoloConnect is a means of transportation that aims to provide connections between the suburbs and the city. Thus, it appears as an extension to urban transport, with the particularity of moving in the air.

Going further and further in the limit of transport, Volocpter allows to quickly connect the suburbs, often badly served, with the cities. With a capacity of up to four passengers, the cruising speed can reach 180 km/h, and can even go up to 250 km/h. This flying car can cover trips in a radius of 100 kilometers thanks to its two propulsion fans and six electric motors. The aircraft is already connected to an autonomous navigation system supervised from the ground, thanks to the VoloIQ platform.

Traveling in the air, an intriguing but potentially frightening concept

Although airplanes are now part of our daily lives, some people are still reluctant to travel in the air. Indeed, in case of a crash, the chances of survival are low. However, the airplane is the safest means of transportation. To continue, aviation has an image of a polluting means of transport. By extension, aircraft designed to move through the air suffer from this idea. Combined with the fear of crashing, companies must therefore be prepared to face some fears.

However, the development of these electric devices is subject to very strict rules to ensure the safety of passengers. Indeed, Volocopter is committed to respecting all the standards in force in the process of creating flying devices and in particular, those of the European Aviation Safety Agency (EASA). In addition, the company benefits from more than ten years of expertise, with tests starting in 2011. Today, Volocopter is one of the most advanced companies in the field of air mobility. This guarantee goes further as the start-up has just become the first company to obtain European certification, allowing it to carry out test flights, under certain conditions. This is a key step towards the commercialization of the flying cab, the Volocity.

This is a very interesting market, which would represent 35 billion dollars in 2035, according to a study by the consulting firm Olivier Wyman. More than 60 cities around the world would be concerned by this technology, which would reduce the influx of cars.

Finally, the company is responding to a problem of the future concerning transportation but also environmental issues with electric devices. These electric devices are therefore part of a sustainable approach while avoiding the addition of noise pollution for local residents. The future has always been imagined with flying cars, and this vision of the future does not seem so far away with the emergence of drones. Thus, many curious people are eager to discover the new means of transportation of tomorrow.