Accueil → Operation of a jet engine

Operation of a jet engine

The history of jet engines

Ever since the myth of Icarus, in which the hero made wings out of bird feathers and flew, humans have been trying to understand how certain species take flight in order to reproduce them with machines. Leonardo da Vinci developed the first concepts in the 16th century. But at the time, the only known driving force was that of human muscles. The fundamental principles that would later help to understand how airplanes fly did not appear until the 17th and 18th centuries, with scientists such as Newton and Bernoulli. In the 19th century, the industrial revolution allowed the development of many technical advances. The Frenchman Clément Ader was the first to take off an airplane with a steam engine, inspired by a bat. About ten years later, the Wright brothers made the first controlled and motorized flights in history, in 1903.

The operation of a jet engine

The first jet engine, or turbojet engine, was designed by the Germans in 1939; however, it was the result of several centuries of research.

How does it work?

The principle is simple. Air is sucked in by a blower; it is continuously compressed before passing through a combustion chamber where it reacts with kerosene and ignites. The induced reaction dilates the gases, which are then projected backwards by a nozzle, causing the aircraft to move forward. The gases come out at a very high speed because they pass through a reactor whose shape is shrinking.

Airlines are constantly trying to improve the performance of combustion chambers to reduce aircraft emissions.

Jet propulsion is indeed based on this action-reaction principle, which says that for every action there is an equal and opposite reaction. Thus, the air ejected backwards exert an equal and opposite force on the aircraft by projecting it forwards. This force is called the thrust. In addition, the higher the speed of the propelled gases, the greater the thrust.

Newton’s law also explains how airplanes fly; if the wing exerts a force on the air (its weight, the force that will make it go down), then the air exerts an opposite force on the wing, called the lift (upward). The fact that these forces compensate keeps the airplane in the air.

In 1731, the Englishman John Barber began filing patents on an internal combustion gas turbine, the ancestor of the turbojet engine. His engine consisted of a compressor, a combustion chamber and a turbine, all powered by a flammable substance. However, Barber was unable to get his invention to work because the technology of the time did not generate sufficient power.

The development of the gas turbine was then delayed by the success of the steam turbine. Finally, following the work of the Romanian Henri Coandă and the Frenchman Maxime Guillaume in the 1930s, it was finally a British man, Sir Frank Whittle, who revolutionised air transport with turbojet propulsion. Instead of using a piston engine to compress the air, Whittle chose a downstream turbine that used the power provided by the exhaust gases to drive the compressor. This new engine was more efficient and powerful than a piston engine.

England and Germany developed the first turbojet engines simultaneously. It was the German Hans Von Ohain who developed the first jet engine for the Heinkel Company in 1939. The first jet aircraft was then the Heinkel He-178, used for combat. However, the first flight was interrupted due to a bird sucked into the engine. During the Second World War, the arms race accelerated the birth of modern aviation. The United States and the Soviet Union caught up at the end of the war, followed by France, previously held back by the German occupation. The first civilian aircraft using jet engines appeared in the 1950s.

The different types of jet engines

Generally speaking, turbojet engines make it possible to transform the chemical energy contained in a fuel into kinetic energy. The development of turbojets has been a major challenge from the outset, both military and civilian; the jet engines developed today are much more complex than in the past. For instance, they are equipped with thrust reversers, which are used to brake the aircraft.

We can distinguish several sub-categories of jet engines:

The engines we have described above are from centrifugal compressor turbojets. They are simple to manufacture and robust but the downside is that they require a large diameter engine, which reduces the final speed of the device. Axial turbojet engines were thus invented. The air is compressed through a series of propellers and the performance is better, but this requires more advanced materials. In both cases, the engine must be able to withstand temperatures of up to 2000 degrees Celsius.

In a dual-flow engine, a blower is placed at the front of the compressor. It sucks up a greater amount of air, which then divides into a primary and a secondary flow. The primary flow passes into the combustion chamber, so it is a flow of warm air. The secondary flow is ejected directly from either side of the engine; it is a cold air flow that provides 80% of the thrust. At the exit, cold air mixes with warm air, causing the engine to cool down. This system equips most commercial airliners because it improves thrust and reduces the noise of the engine.

Today, ramjet engines are used in combat aircrafts and missiles because they allow very high speeds to be reached. Their thrust is higher because fuel is re-injected into the combustion chamber, which is called afterburning. In addition, they have no moving parts and are therefore lightweight. The drawbacks are that they cannot operate below a certain speed and that the temperature is very high, which is not sustainable over time for many of the materials. They also need an initial speed to operate. Jets using ramjet engines can reach supersonic speeds. The Concorde engine was a hybrid engine between a turbojet engine and a ramjet one.

Turbojet engines increase their thrust by ejecting as much gas as possible. Turboprop engines don’t. They rely on the rotational power of a propeller, attached to the outside of the aircraft, to provide most of the thrust. Turboprops offer the most economical solution for short-haul flights. They are more efficient and consume less fuel but are limited in terms of altitude and distance. If you would like to know more about the different models of turboprop aircrafts, visit this page. 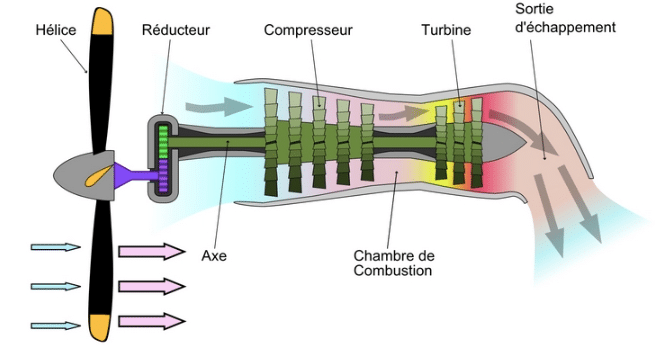 Turboshaft engines were designed for helicopters. Like turbojets, they are equipped with a turbine. Helicopters produced today, like the Dolphins, have a free turbine. It converts the kinetic and thermal energy of the exhaust gases into mechanical energy. It also allows the helicopter’s blades to rotate at a different speed than the compressor, thus ensuring the stability of the helicopter.