These two aeronautical companies have decided to join forces and share their knowledge to work together on a common project: developing the air transport of tomorrow, taking into account environmental challenges. To do this, the Cassio 1, a hybrid-electric aircraft, will be at the center of this challenge.

VoltAero is known for its famous family of aircraft, called Cassio. They are different from other jets because they are hybrid electric planes. This start-up has joined forces with Edeis, a specialist in infrastructure but also an air operator.

Together, they want to work for a sustainable air transport, relying on electric planes, low noise, and low emissions.

These two companies have therefore imagined a Cassio 1 tour of France, which took place from July 5 to 11, 2021. 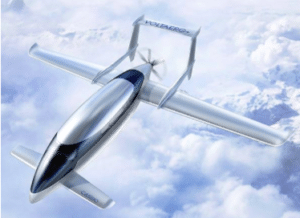 Who are VoltAero & Edeis, the two precursors of sustainable air mobility ?

VoltAero is the brainchild of former Airbus engineers. With more than 50 years of experience, the company had the idea to create the Cassio family of electric and hybrid aircraft. Its difference is also its strength, in the face of tomorrow’s environmental challenges. The Cassio aircraft is currently being tested and is due to be marketed at the end of 2022.

Created in 2008, Edeis is a leader in the field of engineering and operation of infrastructures. Its objective is to enable regional attractiveness by ensuring the presence of quality airport infrastructures. Currently, 19 French airports are managed by the company.

These two French companies intend to revolutionize the aviation of tomorrow. Thus, they are part of a societal approach, that of climate change.

This approach is all the more valued as it appears to be a solution in the face of a law voted by the National Assembly last April. Thus, the law “Climate and Resilience” prohibits flights within the country for a duration of less than 2h30. The aim is to encourage the French to use less polluting means of transport such as the train for short distances.

How do these two partners intend to implement this ?

To achieve their mutual goal, the two companies will create an ecosystem conducive to hybrid-electric aircraft, especially for short and medium-haul flights.

Eventually, the creation of associated distribution centers, but also training schools and various facilities are envisaged.

VoltAero will supply the aircraft, while Edeis will focus on providing airport infrastructure and management.

What are the characteristics of an electric and hybrid aircraft ?

The Cassio has a capacity of between four and ten passengers, with the possibility of flying for three and a half hours, without a break. With an autonomy of 1,200 kilometers, this aircraft has a cruising speed of 360 km/h, thus being able to make national flights without difficulty.

It has great abilities and can be used for several occasions such as commercial flights or medical evacuations. Thus, this aircraft can really have an important place in the interregional flights, in the years to come thanks to its characteristics and its wide range of types of flights proposed.

To go further, it holds a European certification EASA CS23 in the category of single engine aircraft and is also patented by the company VoltAero.

During a conventional flight, the electric motor will be used for takeoff before relying on the combustion engine once in flight to extend the range.

Three versions of the Cassio will be offered :

The first tour of France in a hybrid aircraft

To highlight their desire to offer sustainable and more responsible air traffic, VoltAero and Edeis had the idea of offering the first tour of France in a hybrid aircraft. The aim of these flights is to introduce the Cassio 1 to professionals in the sector, during a test phase.

It started in Lorient, in Brittany, before going to Tours during the day. It finally arrived in Le Havre on Monday, July 5. Then, the plane made a stopover in Toussous-le-Noble on Tuesday, before heading to Troyes and Dijon the following day. Then, on Thursday, the Cassio 1 landed in Annecy, before continuing its route to Aix-en-Provence. This tour of France continued on Saturday, July 10, with a stop in Nimes before reaching Toulouse Francazal airport. Finally, the Cassio 1 landed at its final destination, Rochefort, on Saturday July 11, 2021. 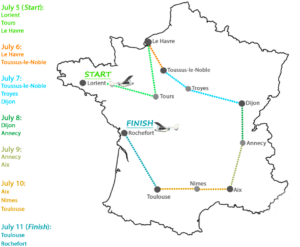 At each stop, guided tours will be offered to appreciate the design, combined with the silent technology of its hybrid-electric aircraft. In addition, information sessions will be available to understand how this innovation came to be.

Thus, this tour will be the opportunity to make discover the Cassio 1, to the professionals of the sector. These two companies will be able to arouse the curiosity of the aviation actors regarding the challenges of regional mobility, which is a common issue for all.

These six days of demonstration will also be accompanied by a double challenge for VoltAero and Edeis, from a technical and organizational point of view. The first concerns the Cassio 1, which will have to prove itself to confirm that it will be marketed soon. And the second one refers to all the logistics necessary for this event, supervised by Edeis.