Want to know more about the Super Guppy?

The Super Guppy is a civil cargo aircraft built in the United States by Aero Spacelines in the 1960s. It can carry about 77 tons of large equipment and is often used for the transport of space components and technology.

NASA commissioned the first models as it needed to carry components and entire sections of the Saturn V rocket for the Apollo project. Transporting the rocket by boat was found to cause rust problems.

Aero Spacelines decided to build the “Pregnant Guppies” using old Boeing 377 Stratocruisers. However, they were too small and another aircraft was needed to transport the parts to the Cape Canaveral (Florida) launch base.

The current Super Guppy was built on the basis of a Boeing KC-97 and underwent many modifications; turboprops replaced the piston engines, the wings were lengthened and the fuselage reinforced. Unlike the Pregnant Guppy, the pressurisation was kept in the cockpit in order to fly at higher altitudes.

The aircraft entered service in 1966 and was purchased by NASA in 1979.

Five units were produced. Aero Spacelines launched in parallel the production of the Mini Guppy, intended for the transport of oversized cargo, and the Super Guppy Turbine. The latter was built to meet the demand of Unexcelled Corporation, which purchased Aero Spacelines in 1967.

The Super Guppy became, over the years, more and more difficult to maintain. Its main defect was that it was necessary to open its nose manually and to dismantle electrical cables during loading. This was a long and laborious operation. The freight aircraft was also built from the base of a much older plane and therefore some spare parts are no longer produced today. It also had an old-fashioned cockpit and compass system.

In the 1970s, Aero Spacelines experienced financial difficulties and traded with Airbus.

In 1996, the Super Guppies were replaced by five Beluga aircraft, more modern and quicker to unload. They then became museum pieces in different countries. One aircraft was entrusted to the Toulouse Old Wings collection, and three others were exhibited in the United States (Tucson), Germany (Hamburg) and Great Britain (Bruntingthorpe). The latest model is still operated by NASA.

The Super Guppy is about 43 metres long, with a height of 15 metres and a wingspan of 47 metres.

Its shape resembles that of the Beluga and of the Boeing 747-400 LCT.

The Beluga has taken over on the Airbus side (front loading) and the Dreamlifter on the Boeing side (rear loading). 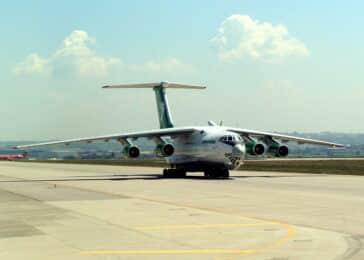