It is not a supersonic jet, but indeed hypersonic that designs the American company Hermeus. Founded in 2018, their slogan “The future is faster”, reflects well their philosophy. And for good reason, they are creating a Mach 5 aircraft!

A speed out of the ordinary

Mach 5 is 5 times the speed of sound, and therefore a speed of 6174 km/h! The Hermeus Quarterhorse jet could fly from Paris to New York in 90 minutes, as opposed to the current 7.5 hours in commercial flight. This new jet will be the fastest reusable aircraft in the world. By way of comparison, the Concorde, a commercial airplane in service from 1976 to 2003, reached speeds slightly above Mach 2.

The American company differs from supersonic flights (developed by the Boom Supersonic company, for example). The latter, equal to 2 times the speed of sound, will probably see the light of day at the same time as the hypersonic Quarterback.

For the moment, these planes will be autonomous, in order to facilitate the test phases in real flight and not to endanger the lives of potential pilots. 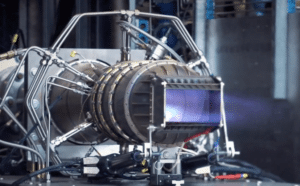 Project supported by the US Air Force

It is with a $60 million participation made in mid-August 2021, that the company can fully develop the testing of their project. The contract with the U.S. Air Force sets several goals, including the creation of a new engine. Based on a GE J85 turbojet engine, the new Quarterhorse jet will certify a combined cycle turbine engine.

The U.S. Air Force is supporting the Hermeus project, but Hermeus also became a NASA partner in February 2021.

When will we see a hypersonic flight ?

With the support and the means to develop, the roadmap of Hermeus is clear: the first test with a small model of autonomous aircraft will see the day in 2023. This will be followed by the creation of medium-sized autonomous aircraft for freight transport in 2025. Finally, the commercial aircraft with passengers will appear in 2029.

Although the price of a trip on this private jet has not yet been communicated, it will undoubtedly cost several thousand euros.

The Quarterhorse will revolutionize the world’s transportation network, and this could be of interest to many! Apart from the military interest of the US Air Force, the use of this jet for governmental or political purposes, as well as for business travel, cannot be excluded. Because traveling at a speed of more than 6000 km/h, would save about 80% of travel time! In a world where time is money, the Hermeus private jet is a perfect solution!

You want to save time and charter a private jet? Our AEROAFFAIRES aviation experts are at your disposal 24/7 for your private flight at +33 (0) 1 44 09 91 82. Do not hesitate to visit our online quote to obtain a price estimate for your private jet.