Want to escape to Bulgaria? Our AEROAFFAIRES team would be delighted to accompany you on your trip to Nessebar, a very touristy town considered the “Bulgarian Saint Tropez”.

Nessebar is located in southeastern Bulgaria, on a rocky peninsula jutting out into the Black Sea, and was declared a UNESCO World Heritage Site in 1983. Nessebar is considered one of the oldest cities in Europe. Indeed, it was founded by the Thracians, its first inhabitants, under the name of Melsambria (in honor of Melsa, its creator) about 3000 years before the new era. Nessebar is thus famous for its rich Byzantine architecture in Bulgaria.

Cultural points of the city of Nessebar

As an expert in private aircraft charter, AEROAFFAIRES provides you with a tailor-made VIP service at the best rates! Our AEROAFFAIRES team is dedicated to providing you with an air consultant who will assist you in all the steps you need to take to rent the private jet of your choice: turboprop, light private jet, intermediate private jet, long-haul private jet, or helicopter.

Nessebar is located in the south-east of Bulgaria, 20km from the nearest airport, Burgas Airport (BOJ). Our flight consultants will be happy to arrange a 30-minute car transfer or a helicopter transfer.

Burgas Airport (BOJ) has a 3,200 meter runway and can accommodate all sizes of aircraft. Thus, you can book the category of private jet of your choice. For example :

The coordinates of the airport are as follows:

The VIP lounge offers a selection of specialties and beverages, newspapers, magazines, TV and free Wi-Fi.

Within the VIP lounge, you will also find a beautiful terrace, a separate playground for children.

The city of Nessebar is rich in history: our AEROAFFAIRES team recommends a visit to the archaeological museum, which has a rich collection of objects from the time of Messevria, the ancient Nessebar. This museum has an impressive cultural and historical wealth.

On site, we recommend the Sol Nessebar Palace All Inclusive hotel.

For a dinner or a lunch, let yourself be charmed by the restaurant Robinzon Fish & Grill. 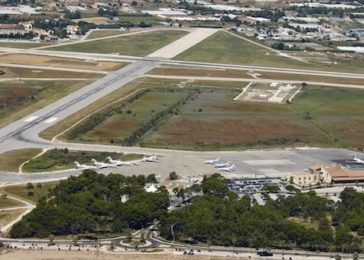