Accueil → Ranking of the 15 busiest airports in the world

Ranking of the 15 busiest airports in the world

What place in the distribution of the world’s busiest airports do Paris airports occupy? Is Atlanta in the top 3 of this ranking? Which aerodrome has entered this distribution in 2018? Is the busiest airport in Africa among the 15? As every year, the Airports Council International (ACI) publishes a classification of world airport traffic based on data collected in more than 175 countries. There is a 6.4% increase in user traffic at the world’s airports in 2018, including a remarkable 8.1% increase in the emerging Asia-Pacific market. Nevertheless, not surprisingly, the hierarchy of the top 15 airports ranked as the busiest in the world remains relatively unchanged compared to 2017. 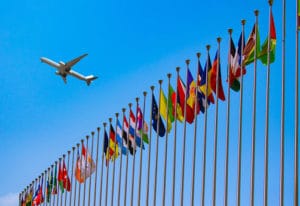 Which airport is the busiest in the world?

With a total of 107 million travellers passing through its halls in 2018, Atlanta Hartsfield-Jackson International Airport in the United States is at the top of the podium, and has been the undisputed leader in terms of world traffic since 2000. The first air hub of the 1970s, Atlanta airport is ideally located: 80% of the American population can reach it in less than 2 hours of flight time, which explains why 90% of its air flow is national. It also holds the world record for the number of destinations served without connections. 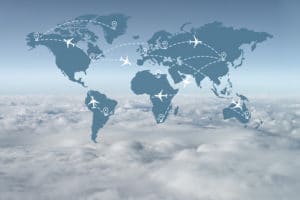 Which other airports are concerned?

2018 integrates in 12th position the Indira-Gandhi International Airport located in Delhi, India, thus confirming the Asian zone’s growth in the air transport market today and in the coming years. Airlines there are struggling to maintain their market share by adapting to the demand of a growing middle class attracted by travel. Airport managers are imagining new playgrounds to accommodate more and more flights and therefore more travellers. To date, 7 Asian airports are among the top 15 in the world in terms of passenger numbers, compared with 4 in the United States and 4 in Europe.

Eternal second on the podium after Hartsfield-Jackson Airport, Beijing-Capital has been on the first place since 2018 for the 101 million passengers carried. It has been Asia’s busiest airport since 2009, overtaking Haneda in Tokyo.

Third in the ranking since 2015, Dubai remains the United Arab Emirates’ leading airport with 89 million users. It can nevertheless boast of being the most important air hub in the world with the highest concentration of international passengers transiting between its walls.

Los Angeles regains its position as the world’s 4th busiest airport after a slight decline in 2017. It recorded a 3.5% increase in passenger numbers, with 87.5 million passengers. As an anecdote, every 30 seconds, a plane takes off or lands there, making it one of the airports where accidents on the ground are the most frequent.

Tokyo-Haneda will see a 2% increase in passenger numbers in 2018 with a total of 87.1 million travellers. It is Asia’s second largest terminal after Beijing-Capital and the main connecting hub for domestic Japanese flights.

O’Hare is the third largest airport in the United States with 83 million passengers and a 4.4% increase in passenger numbers in 2018. Typical of delays due to the numerous flight rotations coupled with difficult weather conditions in this region of the Great Lakes, it accounts for 16% of flight cancellations on American soil.

Europe’s leading airport in this ranking, 80 million users will pass through Heathrow in 2018 to catch their flight. An important air hub, it is the second airport after Dubai in terms of international traffic.

Return to Asia with one of the most pleasant airports in the world, judging by the Skytrax organisation. In 2018, it will therefore remain in eighth position, and has done so for several years now, with 74.5 million passengers.

Ninth position for Shanghai Pudong with 74 million passengers in 2018. It is also the second largest airport in mainland China.

French airports are in tenth position in the ranking with Roissy-Charles de Gaulle airport. In 2018, no less than 72 million visitors will pass through its terminals, making the airport the second busiest in Europe after Heathrow. An anecdote about the top 3 largest French airports, after Roissy we find Orly but also, surprisingly, Nice airport.

With 71 million travellers in 2018, Amsterdam-Schiphol is the second-last European in this ranking. It has long been appreciated by users for its quality of service and the large and varied range of services it offers on European and intercontinental flights, and has been awarded 4 stars by Skytrax.

Faithful to the statistics concerning the growth of the aeronautical market in Asia by the growing multiplicity of flight offers and the various airport constructions, India makes its entry in the ranking by stealing the place from Dallas airport. Between 2000 and 2018, India takes 5.9% of the world share of passenger traffic. The Indira-Gandhi airport experiences a strong growth in traffic in 2018 of 10.2% and welcomes 69.9 million travellers in that year. Currently having 3 terminals, it is expected that 3 others will be created in a few years to allow the airport to receive 100 million visitors.

Guangzhou-Baiyun, the third largest airport in mainland China, will have 69.7 million passengers in 2018.

Frankfurt Airport is one of Europe’s most important airports in terms of connecting passenger traffic. It is the last European airport in our ranking and follows Canton-Baiyun with 69.5 million passengers.

The one that closes this classification after having lost 3 places since 2017 is Dallas-Fort Worth Airport and its 69.1 million itinerants. A small consolation prize for the latter: it is nevertheless the third largest airport in the world in terms of surface area.